What is UI design? What is UX design? UI vs UX. What’s the difference?

UI design and UX design are two of the most often confused and conflated terms in web and app design. And understandably so. They’re usually placed together in a single term, UI/UX design, and viewed from the surface they seem to be describing the same thing. It’s often hard to find solid descriptions of the two that don’t descend too far into jargon. But fear not!

What follows is an easy-to-digest primer on these terms.

By the end of this article, you’ll have a good understanding of what differentiates them and how they relate to each other. So let’s dive in!

What is UI Design?

The “UI” in UI design stands for “user interface.” The user interface is the graphical layout of an application. It consists of the buttons users click on, the text they read, the images, sliders, text entry fields, and all the rest of the items the user interacts with. This includes screen layout, transitions, interface animations and every single micro-interaction. Any sort of visual element, interaction, or animation must all be designed.UI Design Examples for Inspiration
UI & UX Design Inspirationuxplanet.org

This job falls to UI designers. They decide what the application is going to look like. They have to choose color schemes and button shapes — the width of lines and the fonts used for text. UI designers create the look and feel of an application’s user interface.

UI designers are graphic designers. They’re concerned with aesthetics. It’s up to them to make sure the application’s interface is attractive, visually-stimulating and themed appropriately to match the purpose and/or personality of the app. And they need to make sure every single visual element feels united, both aesthetically, and in purpose.

What is UX Design?

“UX” stands for “user experience.” A user’s experience of the app is determined by how they interact with it. Is the experience smooth and intuitive or clunky and confusing? Does navigating the app feel logical or does it feel arbitrary? Does interacting with the app give people the sense that they’re efficiently accomplishing the tasks they set out to achieve or does it feel like a struggle? User experience is determined by how easy or difficult it is to interact with the user interface elements that the UI designers have created.

They determine the structure of the interface and the functionality. How it’s organized and how all the parts relate to one another. In short, they design how the interface works. If it works well and feels seamless, the user will have a good experience. But if navigation is complicated or unintuitive, then a lousy user experience is likely. UX designers work to avoid the second scenario.

Designing in a vacuum leads to less than ideal results.

There’s also a certain amount of iterative analysis involved in UX design. UX designers will create wireframe rendering of their interface interactions and get user feedback. They’ll integrate this into their designs. It’s important for UX designers to have a holistic understanding of how users prefer to interact with their applications.

How They Work Together

So a UX designer decides how the user interface works while the UI designer decides how the user interface looks. This is a very collaborative process, and the two design teams tend to work closely together. As the UX team is working out the flow of the app, how all of the buttons navigate you through your tasks, and how the interface efficiently serves up the information user’s need, the UI team is working on how all of these interface elements will appear on screen.

Let’s say at some point in the design process it’s decided that extra buttons need to be added to a given screen. This will change how the buttons will need to be organized and could require changing their shape or size. The UX team would determine the best way to lay out the buttons while the UI teams adapt their designs to fit the new layout. Constant communication and collaboration between UI and UX designers help to assure that the final user interface looks as good as it can, while also operating efficiently and intuitively.

Research is vital for both UI and UX designers. It’s important for both disciplines to gather as much good information as possible to assist them in crafting appropriate designs, and both follow a similar approach.

Both will research what users want. What they expect from applications of the sort being developed. This research is often iterative, involving usability sessions, where real users will interact with scaled versions of certain functionality or visual designs being tested to determine whether the designers are moving down the proper path. Feedback is integrated with each iteration.

This process involves generating low fidelity prototypes, like wireframe renderings of interface elements in order to gauge a user’s response strictly to the functionality being tested. This can also involve fast visual prototypes and A/B tests of different possible versions of the look and feel of the interface to determine which one users prefer.

In all cases research helps guide the steps designers take as they build their contributions. However, the information UI and UX designers are looking for is very different.

UI designers need to make sure the visual language they choose fits the class of application they’re writing. They’re trying to predict user expectations. If your team is designing a travel app, it’s important to research how other travel apps have been developed in the past. Which ones worked? Which ones didn’t? There are design lessons to be learned from the work others have done before.

Research might indicate that people prefer outlined icons instead of bold shapes. This is a visual shorthand that people are comfortable with and enjoy. UI designers would then do well to incorporate that lesson.

The exact aesthetic they choose is up to them, but the basic “rules,” or the need to conform to user expectations, is something designers ignore at their own risk.

Not to say risks shouldn’t be taken. UI designers want their interface designs to stand out and be memorable. But this must be balanced against making sure people recognize the purpose of the elements you’re placing on screen.

UX design is particularly interested in user expectations. All of the experiences and interactions that users have had with every application they’ve used in their lives have helped set their expectations for how interfaces are supposed to work. If a UX designer isn’t intimately familiar with these expectations, they could inadvertently design an interface interaction that seems logical to them but breaks commonly accepted conventions. Users don’t like when an interface behaves very differently than they were expecting, and this could negatively impact their experience.

If a UX designer decides to do something different, they need to have a very good reason, because breaking a deeply trained expected behavior will likely cause people to do the wrong thing frequently.

As an example, most people are comfortable with the idea that you click twice on a file to open it and once to select it. This is an interface behavior that has existed almost as long as there have been graphical user interfaces.

UI design and UX design involve very different skill sets, but they are integral to each other’s success. A beautiful design can’t save an interface that’s clunky and confusing to navigate, and a brilliant, perfectly-appropriate user experience can be sunk by bad visual interface design that makes using the app unpleasant. Both UI and UX designs need to be flawlessly executed and perfectly aligned with pre-existing user expectations to create an excellent user interface/experience. And when those stars align the results can be astounding.

If you like this article, please feel free to share, translate to your language, but don’t forget to backlink 😉 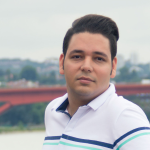 Sayid Moghadamآموزشی2020/05/18
Course overview This course aims to equip you with a broad understanding of mobile and covers the foundations of mobile development and design such as the Internet of Things, wireframes and app development. We will also be considering the critical …
END_OF_DOCUMENT_TOKEN_TO_BE_REPLACED

Sayid Moghadamآموزشی2020/05/18
Meet the team 22 comments Who will support your learning? This course is being provided to you by Accenture to help you gain digital skills. Accenture aims to use their expertise to help you gain the skills to succeed in today’s …
END_OF_DOCUMENT_TOKEN_TO_BE_REPLACED

Sayid Moghadamآموزشی2020/05/18
The benefits of mobility 37 comments Mobility has become a big part of our lives, and this is because it has many benefits for both individuals and businesses. Watch this video to learn about the key benefits of a mobile experience, …
END_OF_DOCUMENT_TOKEN_TO_BE_REPLACED